That Donald Trump!  Always putting his foot in his mouth, especially with his Tweets.  Just about everyone including his closest advisors wants him to clean up his act.

So now El Presidente has hired a former Obama administration PR type to make sure everything he says is politically correct or “PC”, particularly on Twitter.  Below are some of the Tweets the president wrote and the sanitized version of his new correct-speak advisor. 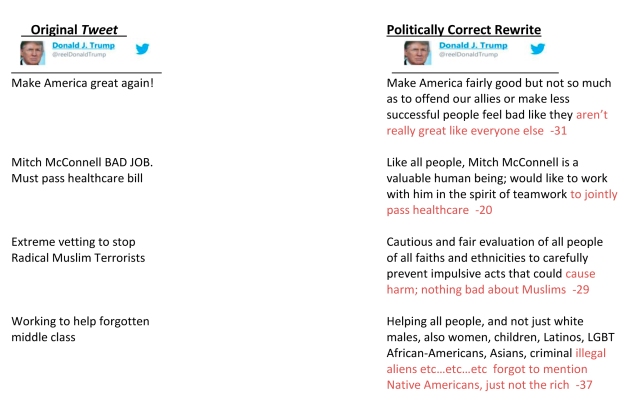 Now Donald Trump is sure to improve his presidential image and popularity, and win re-election in 2020.  We can all look forward to Making America Great (er…pretty good) Again!

In California (where else?), a first grade girl was called to the principal’s office for grilling and potential discipline (which she dodged in the end) for calling another child by his (or newly “her”) given first name.  It seems the second child had been a “boy” the prior year, and was “transitioning” to a girl in a gender switch.  The naughty little first grader called the gender-mobile child by the male name she had known him (now “her”) by for the prior years.  The offending girl was investigated for gender bullying and eventually cleared when the “pronoun mishap,” a term coined by the school, was found to be unintentional (WHEW! – close one).

I have absolutely nothing against transgender people, although I confess to finding it profoundly odd.  And I have sympathy for the discomfort they must experience in the process of changing genders.  I likewise have no patience for bullying people who are different from the majority, be it because of race, religion, disabilities, sexual orientation or any other status that can be used to arbitrarily define people.

But bending over backward to invent verbal offenses and to make differently appearing or abled persons permanent victims meriting extraordinary deference is preposterous.

Political Correctness has invaded our language.  Here is a quick guide, taken from several sources, to nasty words or phrases according to the PC police.

I suppose taken to its logical conclusion, a person (male identification) must become a gender neutral perper, a woman (here we go again, male reference) should be a woperper, more simply a woper, or perhaps ideally a wowo.  Then again a human would have to be a huper or arguably a huperper.  And lest we forget, a female becomes a feperper or fewowo, while a wife (demeaning connotation) is a wowospouse.  But then must a manhole cover become perperhole cover or maybe even a huperhole cover?  But wait!  Is hole politically correct?  We must move to a huperperspace cover!  What’s a fellow (er…nonwowoperper) to do?  I’m getting more confused by the second.  It’s going to be dang difficult to learn this new language to keep the Political Correctness Police at bay!

President Donald Trump was wildly criticized following recent violence in Charlottesville for saying both sides of clashing demonstrators shared blame, and both contained some “good people.”  And after his media-bashing rally in Phoenix Tuesday night, CNN doubled down on the claims.  We followed him closely during the campaign and in the White House.  He never said anything racist and has made public statements, recently and going back many years, condemning racism, white supremacist groups and the like.  He speaks regularly about uniting America and viewing all of its people as equals, while his platform includes rebuilding inner cities and the like.

Yet the left, and particularly the national media, assume as a given that he is racist and courts white supremacists, despite all the contrary evidence.  In the face of this chorus, how can we really know if he is a racist?

Here are the Top Ten Ways to know that Trump is racist based on recent statements from public figures on the left:

7   The president wants to stop people from illegally sneaking across the southern border; c’mon (Nancy Pelosi)

6   He colluded with Russia to defeat Clinton; if he’s that unfair, he’s got to be racially unfair (Adam Schiff)

5   Why else would I want him assassinated? (Missouri Sen. Maria Chapelle-Nadal)

4   He’s a Republican president, so I’ve got to say anything to take him down (Chuck Schumer)

3   No person of color has hair like Trump’s, so it must be a fashion statement against minorities (Stephen Colbert)

2   95% of black people voted against him – do they know something? (Rachel Maddow)

And the Number One Reason we know Trump is a racist…

1   OK, he probably really isn’t, but we hate him so much for calling out our fake news (Jake Tapper)